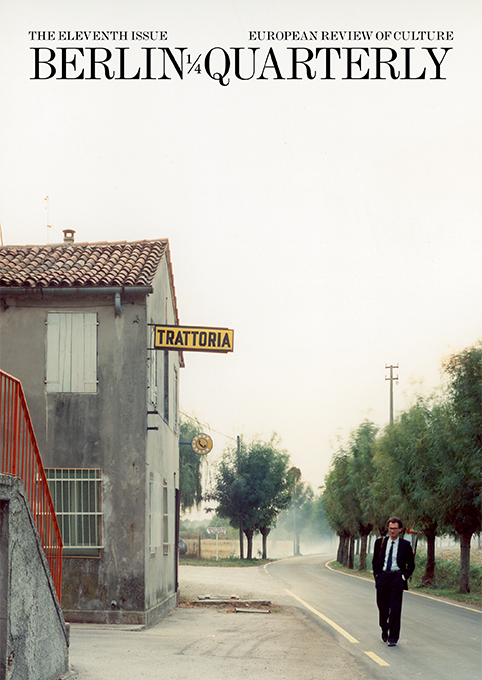 In Berlin Quarterly’s signature long-form reportage, Peter Frederick Matthews travels to the Prora, a colossal building complex on the island of Rügen, Germany. Alongside his research into the Nazi roots of the world’s largest holiday resort, Matthews also traces the history of tourism, and the interplay between the tourism industry and state-sponsored violence in Germany and abroad.

Teresa O’Connell translates Valerio Mattioli, who describes the history and geography of the city of Rome based around the GRA ring road. Mattioli also dissects Rome’s foundational myth of Romulus and Remus, and envisages potential futures for the city based these origins.

Heather Cleary translates Roque Larraquy in A Report on Animal Ectoplasm, a magical realist depiction of life and death in Argentina. Claudia Durastanti’s portrait of her relationship with her mother, who is deaf, tenderly explores their separate and communal interactions with music.

Through her memoir In The Dream House, Guggenheim-winning writer Carmen Maria Machado combats the erasure around domestic violence in lesbian relationships. Her poetic, innovative prose recounts her abusive relationship, tying in artistic representations of love and violence.

An expansive dossier presents nine contemporary poets from Turkey. This survey of work is wide ranging both in style and content, and is essential reading for those interested in current writing from the region. Berlin Quarterly’s eleventh issue also includes work from Patrizia Cavalli, printed with the original Italian, alongside an exclusive interview.

The photo portfolio features two collections by Guido Guidi: one showing a series of images from the Venetian mainland in the 1980s, and the other depicting the changing landscape along the via Emilia – an ancient Italian road connecting Milan with the Adriatic coast.

The archive section boasts a series of colourful infographics about the advancement of African Americans, originally presented by WEB de Bois at the 1900 World's Fair. These images, contextualised by an in-depth introduction, explored and combatted the narratives of black life in post-slavery America.

Reportage Ruins of the Future by Peter Frederick Matthews

Fiction A Report on Animal Ectoplasm by Roque Larraquy

Portfolio In Veneto
Per Strada by Guido Guidi

Poetry An Interview with Patrizia Cavalli by R Teresa O’Connell

Memoir In the Dream House by Carmen Maria Machado